The first North Dakota state high school trap shooting tournament went off with a bang–several bangs. The tournament took place at The Shooting Park of Horace on Saturday. 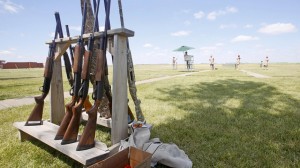 The sport, which involves shooting at flying targets called clay pigeons, isn’t new to the state but it is for high schools in North Dakota. Organizers of similar leagues in Minnesota and Wisconsin said there was a lot of interest in North Dakota and they expect the sport will grow. When Minnesota’s trap shooting league was founded in 2008, there were about 30 kids in the sport, as opposed to the 8,500 kids involved today, said John Nelson, the vice president of the North Dakota State High School Clay Target League.

“We had kids that were on the border in North Dakota … that were trying to get into our Minnesota program,” Nelson said. “So we thought, why don’t we just do this in other states.”

Nelson said he expects more schools to allow the sport, which Nelson says is completely safe and self-sufficient in terms of funding. 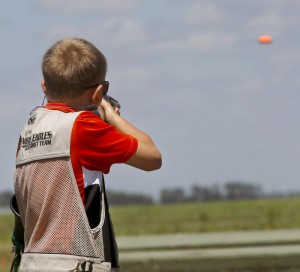 “It was a really good feeling. Me and my buddies didn’t win in hockey or golf, so my buddies and I decided, hey, trap shooting might be a good opportunity,” Hill said. “Plus, our love for the sport is very strong, so we figured we’d give it a shot and see if we could win one before our high school career is over.”

Hill said he is no stranger to hunting or trap shooting. He had experienced trap shooting with his dad several years back, and said he often goes shooting on the weekends.

“Especially for me, being a senior and already being graduated, just representing Oak Grove one more time is such a great accomplishment, especially to go out with a bang like this,” Hill said.

Oak Grove coach Brad Sunderland said his team was new to the sport and shooting in general, but they learned fast and were close to beating Devils Lake, a city that has had a 4-H shooting program for several years.

“Our kids all did unbelievably well today,” Sunderland said. “At the beginning of the year some of our kids on our team had never shot guns.”

Devils Lake head coach Doug Darling said the win was special for his kids and the school which didn’t have much success in other sports this year.

“They worked really hard all year and we had great support from our coaches and parent volunteers,” Darling said. “They really pulled it together to make it happen.”